BGII with the Throne of Bhaal expansion is required. Ascension is not required, but I definitely suggest having it installed. It adds 'flavor' to LR.
LR should install correctly over any other WeiDU mods. In particular, it will work fine with other common WeiDU mods (e.g., Tactics, Ascension, Ease-of-Use, Rogue Rebalancing, and various custom npc Romances.) If you wish to run Longer Road with BP -- contact me for details or see the player's notes in the FW FORUMS. There are some tricky issues with 'heavy' version of BP, LR seems to work fine though with BP-light.

Extract the main archive into your BGII main directory. This is normally:

Then choose which components you would like to install. You may always
uninstall them later by re-running "Setup-LongerRoad.exe".

You absolutely HAVE to start a new ToB game to play LR. No old savegame from ToB section will work, since the first event of the mod happens before you confront Illasera.

The Longer Road mod works best if you start with either a savegame from SoA finale, with 'un-looted' 3rd (demonic) level of Watcher's Keep , or an entirely new ToB game. If you looted the demon layer in your SoA game you will miss the most important quest of the Longer Road mod.

You will NOT be able to obtain the 'good' ending if you have looted the demon maze layer in WK. All other 3 endings are still possible.

All Ascension limitations about game freeze are still valid with "Ascension - LR" combo, but it is no worse.

Brief Overview of the mod

The Longer Road mod allows you to restore your main adversary from the SoA portion of the game back to life, and take him into the party to fight on your side. There are strings attached though... so be careful how you conduct your negotiations with Irenicus, and what exactly do you promise him. Each version of the contract has its negative sides.

The mod adds a few additional scenes to the ToB portion of the game that
should start right after your character first appears in the Elder Grove.

1) In order to proceed with the plot you have to have Irenicus's old mask in
your inventory when you are teleported into the Pocket Plane. It is up to the player to obtain it... just be persuasive enough.

If you have the mask you will have a visitor to the PP, soon after you complete
the first challenge.

2) In order to proceed further you will have to make choices and convince Irenicus to join the party. No, he will not leap at the opportunity or try to blackmail you like Sarevok. So, if you want him you will have to work on it.

3) After you get Irenicus into the party he will have many conversations with PC. It is up to the player how to role-play these. Obviously your choices will affect the final outcome.

4) Each Bioware npc has multiple banters with Irenicus.

The highlights of the LR, itself, besides the banters and interjections are:

* Volo conversation, new forced talks with Cespenar, Nyalee, Machine of L.t.M., and many Saradush dwellers if you send Irenicus to talk to them. Basically, try talking to every npc you can think of, to see if Irenicus has anything to say.

* Extensive New Quest in the WK. It starts in the demon maze layer as soon as you enter. You have to have Irenicus in the party when you first enter the maze to start the quest.

* Experience Cap reset to 40. No need to remove your old one though.

* Many of the original in-game npcs have gained portraits.

* Books of the Elven Lore. Learn more about elves of Toril - the books have new unique bams and there are 7 of them altogether. All info in the books was taken from reliable FR/Ad&D sources.

* 4 different epilogues for Irenicus. Try to get them all - hopefully they are different enough to be worth the effort.

3. Jon commenting on PC choices while passed out

1. Irenicus going hostile after speaking with the drow woodcutter

2. Irenicus dying instantly after speaking with the monk in Abazigal dungeon.

1. Irenicus and Machine of Lum the Mad exploit.

2. Small correction of the Carston interject.

1. The looping dialog after talk #6 -- if Irenicus chooses evil path after this conversation.

2. If Player promised a soul and refused Sendai's soul Jon should now ask for a 'dragon' soul the second time. Also this should notresult in him immediately have a 'refuse soul' dialog and change alignment.

3. Made it so that he does not say his piece about wanting Balthazar's soul if he is redeemed.

Now you should be able to leave Pocket Plane in all cases when you refuse Rielev to take Jon into the group.

Lots of fixes in this release.

1. Firstly jcompton (who was kindly testing the mod) pointed out to the possible problem with series of cutscenes in Hell (the scripts and dialogs were not flowing tightly enough from one another, allowing for pauses and saving the game, which caused more problems.) I revised the scripts here and made the area un-save-able, added a few features for security and fixed the problem with absent 'start cutscene mode' action in a few scripts.

2. Secondly looping dialog #5 in case of chosen evil path was fixed, it was related to not updating the counter in one script.

3. Thirdly I finally tracked down and restored the missing nymph and minotaur from Improved Gromnir - Ascension component. Also tried to tighten the script by adding extra GLOBAL to avoid freezing the game if PC is not able to speak.

The release 1.4.3 includes revision of the Gromnir fight scripts.

Added credits for the Soundwork to the Readme file.

In v1.4.1 Irenicus has a new Paperdoll bam -- it looks rather nicer I think. Thanks to T.G.Maestro for advice and Sir-Kill for help with editing the picture.

The release 1.4.2 includes quite a few new bams by Sir-Kill, whom I want to thank once again for doing exceptionally good job on these.

Also as suggested by Arcalian, Irenicus's 'Critical Hit' voice selection was changed to a new line. 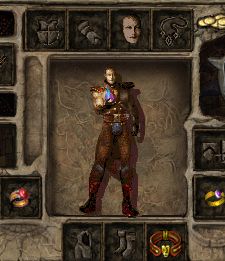